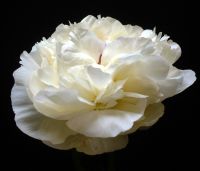 The clearest white we grow. Creamy white double blooms on long, strong stems with an occasional res steak through out the flower. A very popular and highly sought after cut flower.